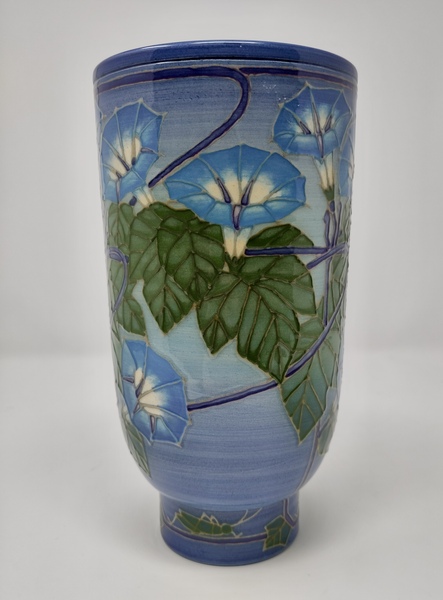 Founded in 1993 by Sally and Richard Dennis, the Dennis Chinaworks pottery is run from the converted stables of a Victorian Gothic rectory in Somerset, England.

Sally established her professional name in design, Sally Tuffin. After graduating from the Royal College of Art Fashion School and starting a design business with Marion Foale. Foale & Tuffin soon became one of the leading design houses of the 1960’s. Sally later took her skills and experience into ceramics, becoming partner and design director of the Moorcroft Pottery from 1986 to 1993.

Richard Dennis OBE trained with the auctioneers Sotheby’s before establishing an antique glass and ceramic business together with a publishing house producing specialist books.

This Morning Glory Vase measures 22cm high by 12cm at its widest point and come with the Dennis Chinaworks authentication stamp on the base.
No. 13/20